There are places in real life that we did not realise at all when we see it on sets in movies. Here are some of the popular filming locations in the famous movies list that we picked out. Perfect places to visit once in a lift time for movie enthusiasts! 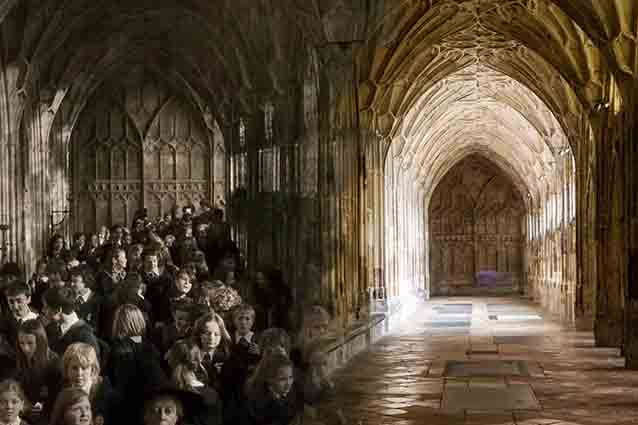 Cathedral Church of St Peter and The holy and indivisible trinity

The spectacular Gloucester Cathedral was used for various interior settings in the series. The cathedral was built in Romanesque & Gothic style in 1089, located in Gloucestershire, England. The most notable characteristic is the stained glass from the 14th century and renown for the 225 foot high central tower that is visible from the city centre. 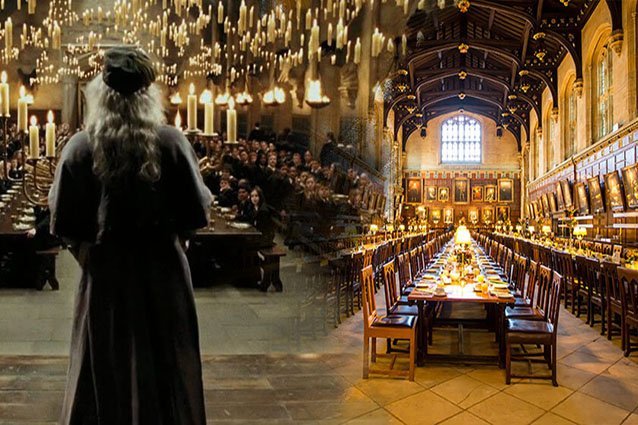 an inspiration for the great hall in hogwarts

The iconic Great Hall throughout the series got an inspiration from Christ Church’s dining hall, located in Oxfordshire, Endland. The church was established around 475 years ago and is a joint foundation of the college and the cathedral in Oxford. 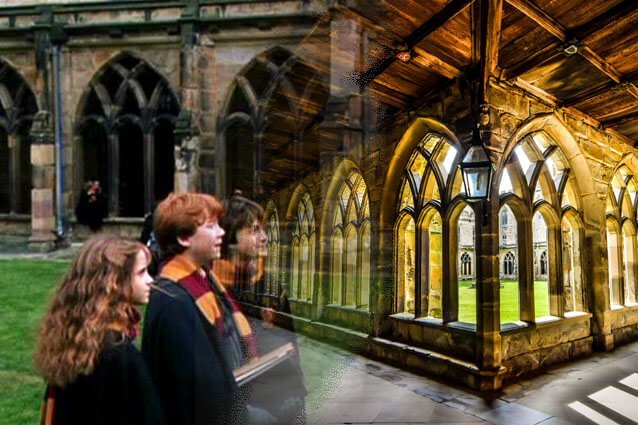 the cathedral church of christ, blessed mary the virgin and st cuthbert of durham

Durham Cathedral has been used for interior and exterior shots of Hogwarts. The cathedral was built in 1093 in Gothic/Romanesque/Norman decor style, located in Durham, Newcastle, England. It is the seat of the Bishop of Durham. Daily Church of England services are also provided in the cathedral. 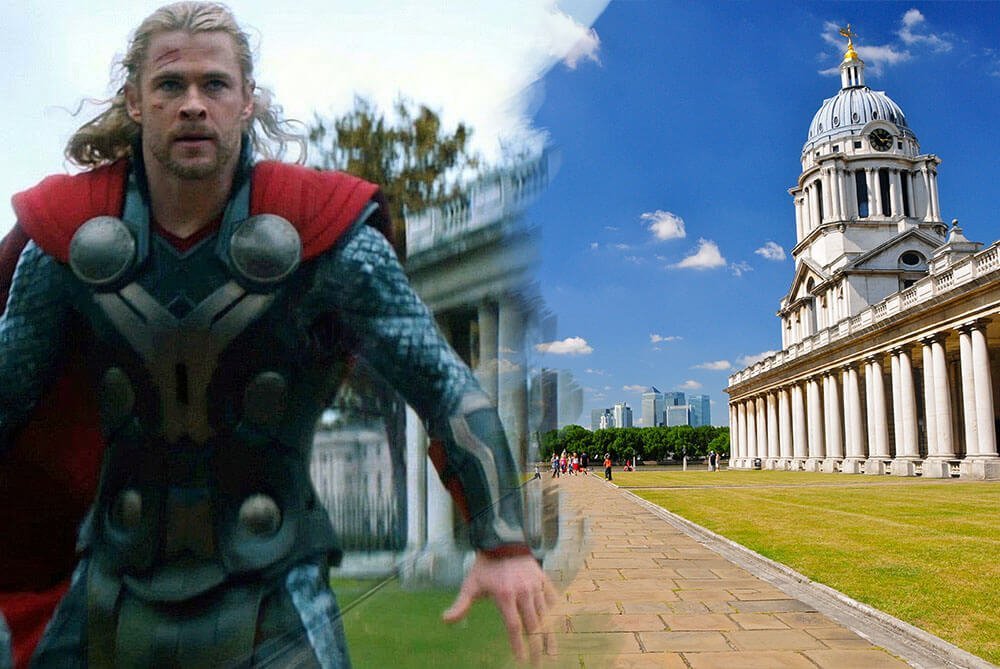 Old Royal Naval College, located in London. The college was built in 1998. The college got given the title of being “outstanding universal value” by UNESCO. An architectural masterpiece of Maritime Greenwich, it was one of the most popular filming locations appearing in several movies: such as The Golden Compass, Pirates of the Caribbean: On Stranger Tides, The Wolfman, The King’s Speech, Sherlock Holmes: A Game of Shadows, The Dark Knight Rises, Skyfall, Les Misérables, Mortdecai and Cinderella. 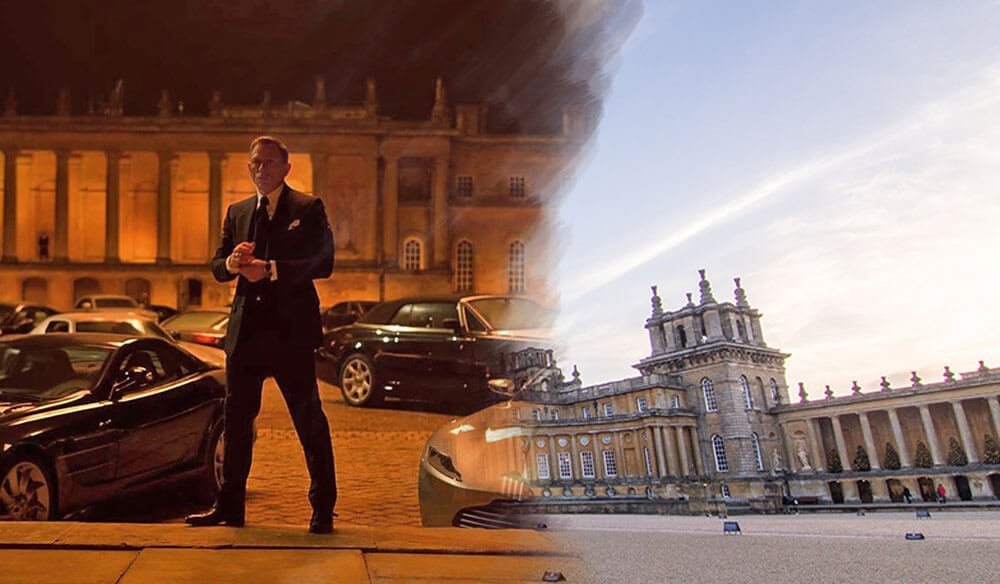 One of the scenes in James Bond 007: Spectre was filmed at Blenheim Palace which is located in Oxford, England. The palace is the residence of the Duke of Marlborough and the only non-royal, non-episcopal country house in England. Blemheim Palace was built around 1705 in English Baroque style. The palace, one of England’s largest houses and was given the title by a UNESCO being one of the World Heritage Site in 1987. Other than 007 Spectre, Mission Impossible: Rogue Nation, Entrapment, Dr.Doolittle, Harry Potter, Cinderella (and more) were also filmed here. 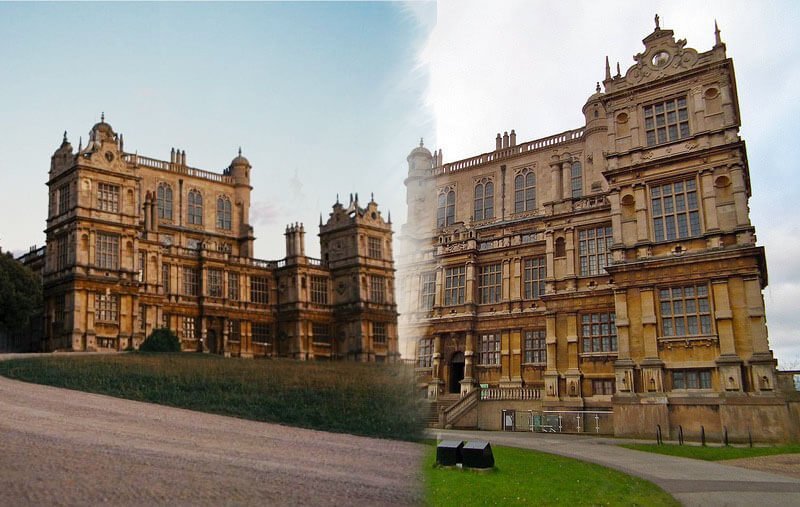 Wollaton Hall is the historic Elizabeth country house of the 1580s which is located in suburbs; Wollaton Park, Nottinghamshire, England. Despite the spectacular history and architecutural style, Wollaton Hall is now a prominen Grade one listed building and is the city Natual History Museum, which also open for public visitors. The Hall made various appearances in Batman: Dark Knight Rises as a Wayne Manor. 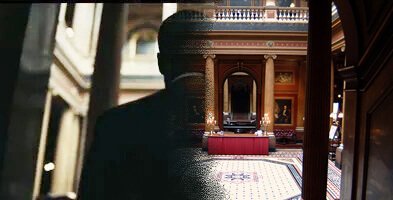 Reform club is located in Central London. It is, however, not open to public visitors – only members are allowed to in the facilities. The architecture style was built around Italian Renaissance as an inspiration by Sir Charles Barry in 1836. Due to the outstanding interior design, the club has been used in settings on various film such as Tenet, James Bond: Die Another Day; Quantum of Solace and Sherlock Holmes and more. 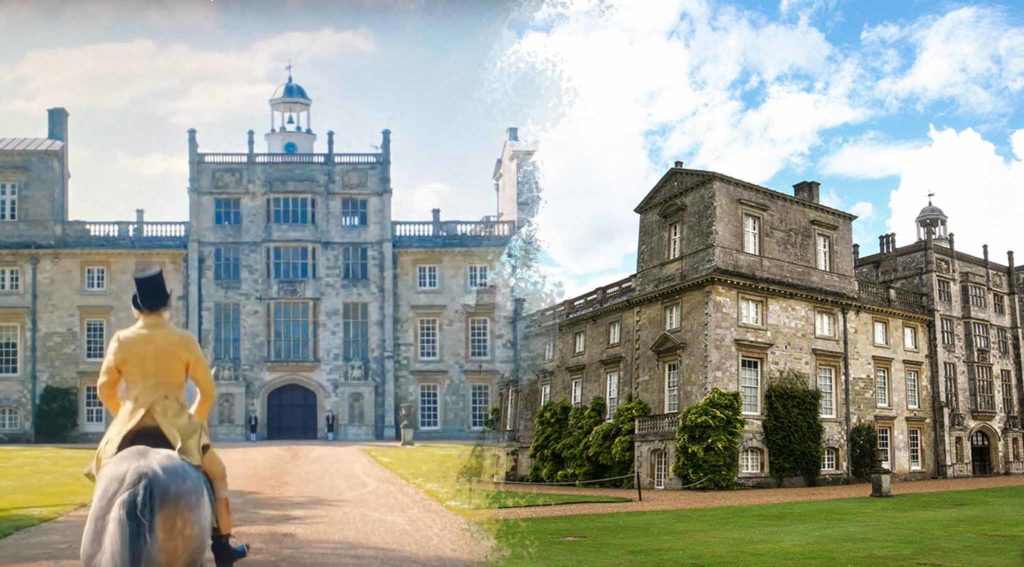 an english country house in wiltshire. the country seat of the earls of pembroke for over 400 years

“Donwell Abbey” in Emma is in fact in real life The Wilton House, located in Salisbury, Wiltshire. The house is now welcome public visitors. The estate is surrounded by several bridges and gardens in total of 14,000 acres (which is massive! equal to 56,655,990 square metres). This infamous Wilton House has also been used as a setting in movies (and series). For example, Tomb Rider (2018 version), The Crown, and Bridegerton. 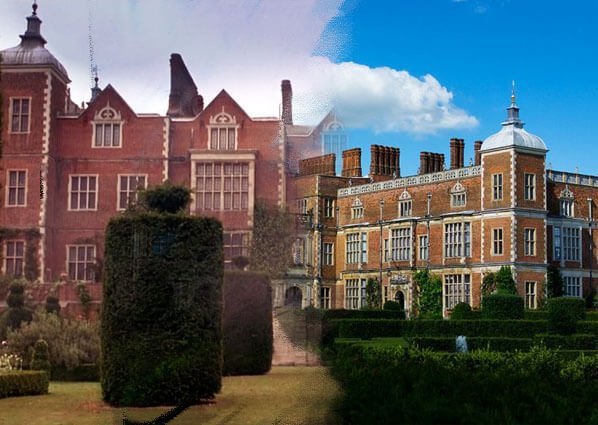 a country house set in the great park in hatfield, hertfordshire, england

Another popular filmimg location; Hatfield House, or in this case it’s “Croft’s Mansion”. Hatfield House is a country house set in the Great Park which is located in Hatfield, Hertfordshire, England. The house was built in 1611, surrounded by various parks and gardens. It is also open for public visit too! Other than Croft’s Mansion, Hatfield House also referenced in; for example; Transformers: The Last Knight, Wonder Woman, Paddington, 47 Ronin, Harry Potter and the Deathly Hallows and much more! 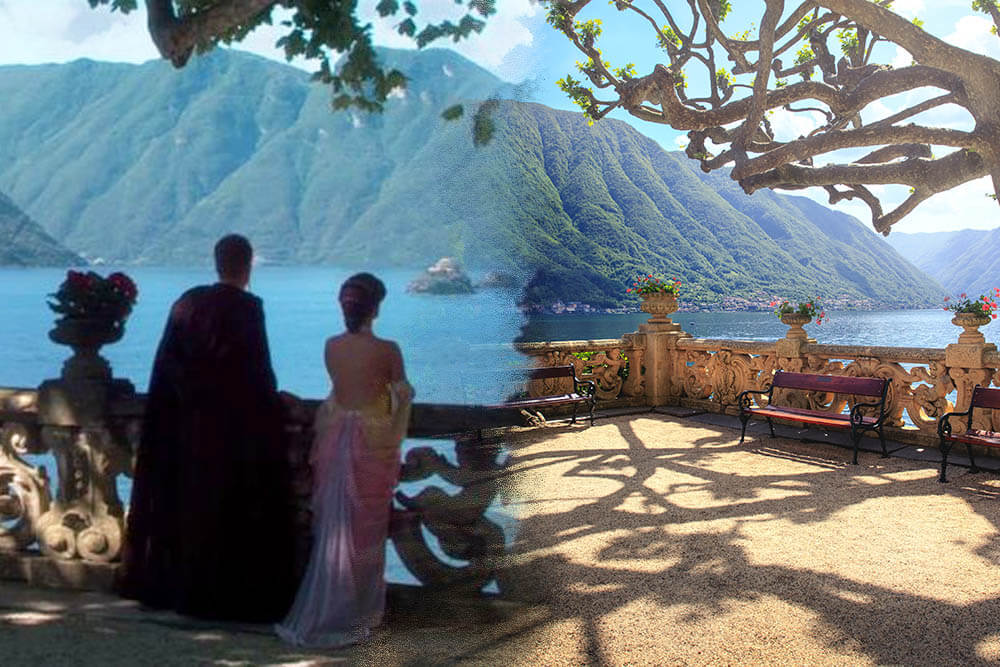 an upscale resort area known for its dramatically breath-taking scenery

Lake Como, Italy a favourite holiday getaway destination (since the Roman time!) due to the miraculous view and its breathtaking scenery. Lake Como has also been used in; Star Wars: Episode II – Attack of the Clones , Ocean’s Twelve, Casino Royale, Imagine You & Me, and Murder Mystery.

9. Indiana Jones and the last crusade 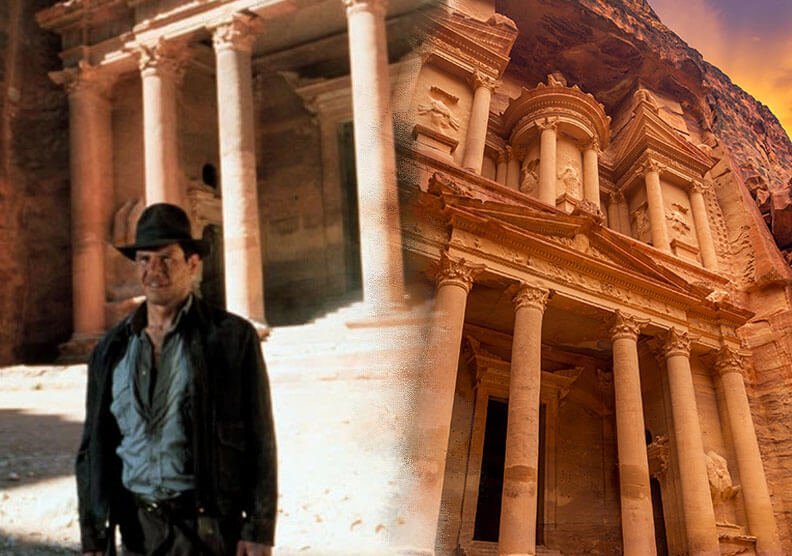 the most elaborate and ancient temples in petra, jordan

The “Lost City” of Petra aka Al Khazneh is located in Petra, Jordan. The fact that the Petra was given the title by UNESCO to be one of the World Heritage site in 1985, and it was named one of the new seven wonders of the world in 2007, making it a perfect setting for ancient scenes as appeared in for example; Indiana Jones and the Last Crusade, Mortal Kombat: Annihilation, Sinbad and the Eye of the Tiger, The Mummy Returns, and Transformers: Revenge of the Fallen. The “Lost City” still has secrets to reveal: Thousands of years ago, the now-abandoned city of Petra. 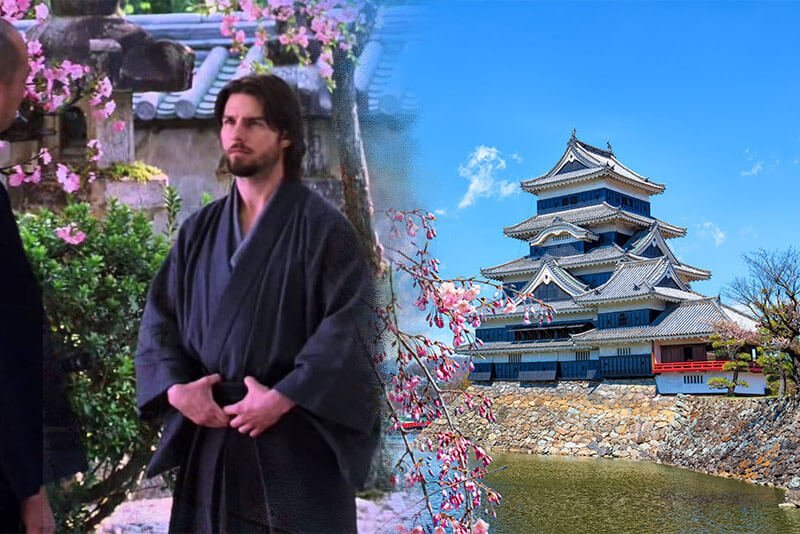 a temple of the tendai sect in himeji, hyogo, japan. it was founded by shoku shonin in 1966

One of the most spectacular temples in Japan; Katsumoto’s temple: Sho-sha-zan Engyo-ji, located in Himeji city in Japan and was founded by Shoku Shonin in 1966. Katsumoto’s temple: Sho-sha-zan Engyo-ji is temple No. 27 in the Kansai Kannon Pilgrimag. To reflect the pristine Japanese Samurai traditional, the movie; The Last Samurai has filmed in this temple. 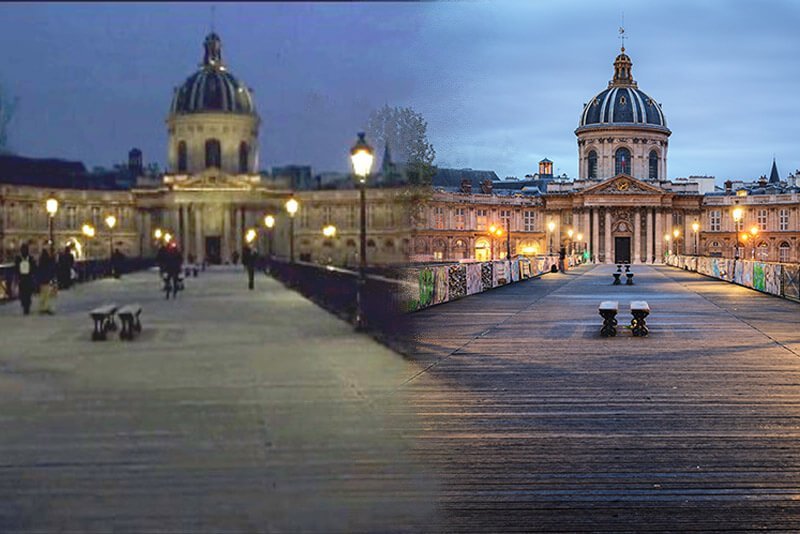 a pedestrian bridge in paris which crosses the river seine

The Pont des Arts or Passerelle des Arts is a pedestrian bridge in Paris. A cute detail – since 2008 tourists started to engrave a “lovelock” with their first names and attaching them to the railing of the bridge. Pont des Arts has made appearances in various films such as The Bourne Identity, Now You See Me, Sex and the City and more. 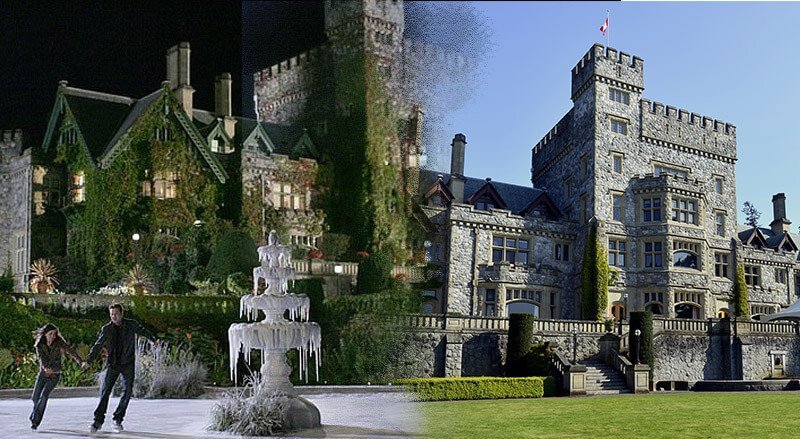 A well-known franchise; X-Men and the Professor Xavier’s School for Gifted Youngsters (aka X-Mansion) that we all love. It was filmed throughout the series, being used for both interior and exterior shots at Hatley Castle which is located in British Columbia in Greater Victoria, Canada. The castle is a Classified Federal Heritage Building since 1995 and has been used for the Royal Roads College. As one of the most iconic locations in Canada, the castle has made numerous appearance in movies such as; X-Men, Deadpool, The Boy and more!